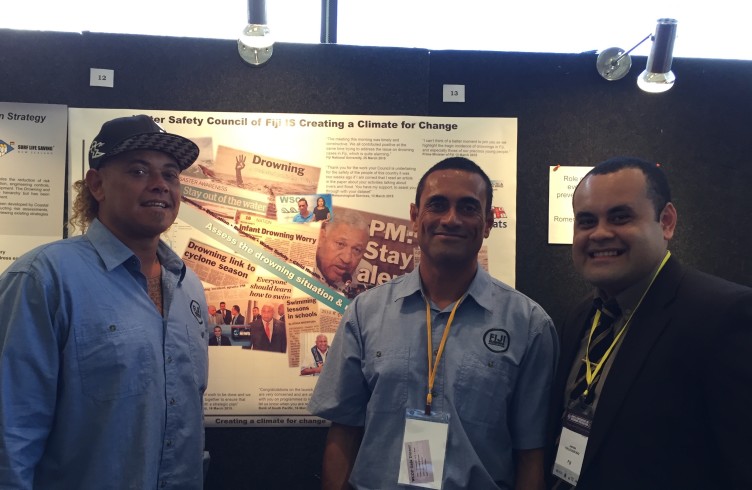 The opportunity for this trip came about through FSA’s work with Surf Lifesaving Australia & drowning prevention in Fiji dating back to October 2011. The invitation came from RNLI – Royal National Lifeboats Institute, who ran the course. Funding for our participation was provided by the Princess Charlene Trust of Monaco.

Godfrey Eaton and John Philp were first flown to the island of Penang in Malaysia for the three day World Conference on Drowning Prevention beginning 4th November, 2015. The conference is an annual event run by the International Life-saving Federation (ILS) which is headquartered in Belgium. Fiji became a full member of the ILS on January 1st, 2016 through the Water Safety Council of Fiji (WSCF) for which the FSA is a founding member. The WSCF mission is to reduce drowning in Fiji through education, advocacy, appropriate interventions, advocating for public beach access & facilities, and the development of a beach culture in Fiji.

We flew into the Penang Island international airport at the very southern tip of the island. The conference venue was the stately Equatorial Hotel just 10 mins drive north of the airport.

The conference itself was very interesting. There were over two hundred presentations over the three days from 65 countries. Topics ranging from the latest scientific research on resuscitation, to pool signage, optimal design of buoy type GPS drifters for measuring rip currents, the history of beach lifeguarding, and the transfer of best practices from big wave surfing to beach rescue services. Because we couldn’t possibly cover all of the presentations the Fijian contingent would meet each morning and split up in order to cover every session – we would then meet back in the afternoon to compare notes. Joining Godfrey and JP were Kathryn Murray from the WSCF and Dr James Kalougivaki – the Fiji Police Force Head Pathologist.

At the Conference JP delivered two papers on behalf of the Water Safety Council of Fiji.

After the Conference we had a day to relocate to the northern resort area of Batu Feringgi on Penang Island (The Lost Paradise Resort) which was to become our home for the next two weeks. Our bus drove us up there with all the other participants from eleven countries around southeast Asia + Kenya.

The course was run very very well by passionate staff from the RNLI using the latest teaching techniques. They would keep each class short, less than 45 minutes as they told us the human brain begins to switch off after this time. All of the teachers would use innovate ways to keep us alert & John Powell was a favourite with his dogs in wigs gig which would always catch the sleepy ones out in class!

Some of us found that the course dragged on a bit as it was designed for people who learned in English as a second language and our prior business experience covered the business development lessons well.

Penang was hot and humid, and one had to devise methods to keep cool. The resort was as close to the ocean as you could image. Unfortunately the ocean was not so clean and we were disappointed that we could not swim each day off the white sand beach. The resort swimming pool became our quick way to cool off.

Malaysian curries accompanied every meal, and the food in Penang all around was incredible and lived up to the hype you’ll read online. The local Penang attendees at the course adopted Godfrey and I and we have made lifelong networks in lifesaving through them and the other Asian and African lifesavers at the course. The daily routine did become hard work though. Everyone lived in shared room accommodation. It was like being in boarding school! Godfrey Eaton and John Philp both took time off from their jobs without pay to attend the course. Flights, accommodation, and food were covered. We took care of incidentals.

So what did we gain from the trip?

The RNLI curriculum is designed for Future Leaders in Lifesaving. It provides a custom built course for those who don’t speak English as a first language. It also provides a network of people around the world who support each other in lifesaving in their respective countries. The Emerging Leaders alumni are actually encouraged to teach the course in later years.

One of the key outcomes for Fiji was that we were able to complete the formal application to the Fiji Government Lands Department for the setting up of a lifesaving club at Natadola Beach.

There were two main streams offered in Penanag : Flood Safety, and Beach Safety. Godfrey took the later, and the JP the Flood Safety Management course so we would cover all bases.

JP presented the two papers at the World Drowning Prevention conference one of which Fiji won 1st prize from 231 papers presented from 65 countries. A great nod for Fiji, and recognition of the sterling research work done by Kathryn Murray for the Council. As a result Fiji has been offered financial and technical assistance from four international bodies – the most high profile of which is the World Health Organisation which is funding a major national Forum for drowning prevention stakeholders in Fiji in the second quarter of 2016 from which will emerge a national Policy + a National Drowning Prevention Plan – Fiji’s first ever. This is a big step for Fiji as it shows that our Government is embracing drowning prevention as a committed partner.

As some may be aware the drowning toll effect is mainly on iTaukei toddlers and males engaged in risk behaviour.

JP received certificates in : Flood Safety, First Aid – Trainer/Assessor, & the Organisational Leadership Course. Godfrey received the same except his first one was for Beach Safety.